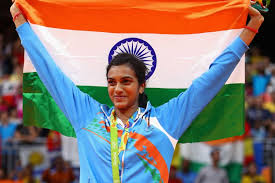 Pusarla Venkata Sindhu is well Known as PV Sindhu professional badminton player. Sindhu has won medals at multiple tournaments including the Olympics and on the BWF circuit including a gold at the 2019 World Championships

Also, she won Millions of Hearts in India, Lot of Teens are inspired by her.
Now She Got Padma Bhushan By President of India Ramnath Kovind.